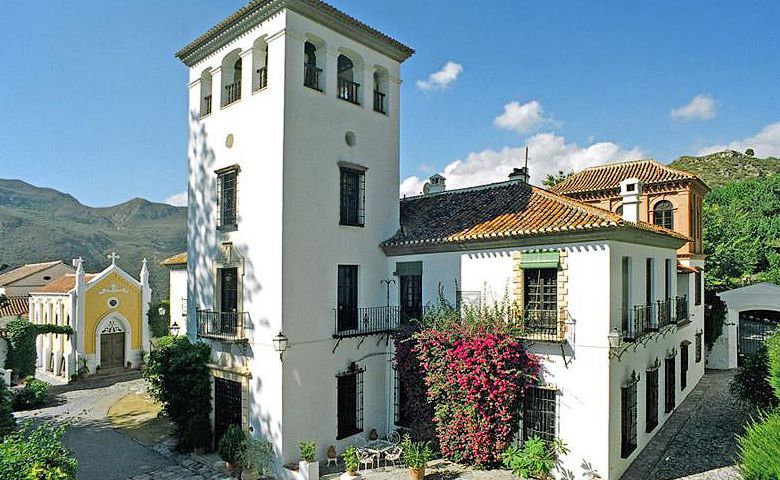 This jewel of Andalucian architecture dating back to 1492, is set deep in the heart of the Spanish hinterland between the coast (1/2 hour’s drive) and Granada (1 hour’s drive). 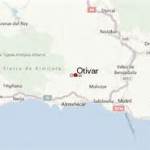 Located at the end of a scenic Tropical Valley. The Mansion is set in a private, quiet and peaceful setting totally away from the hustle and bustle of the coast and nearest towns. 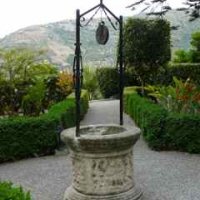 The ornamental Moorish gardens have been laboriously restored to their former glory offering guests the opportunity to wander or relax in total peace and tranquility. Surrounded by centuries old palm trees, shady borders and colourful exotic plants. Ancient cypress hedges border an attractive swimming pool that is fed by a natural spring. 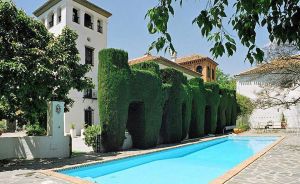 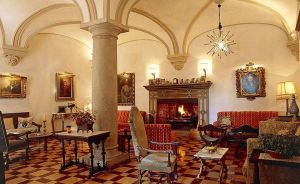 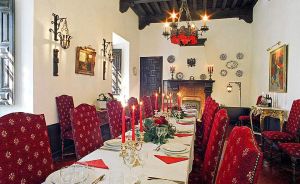 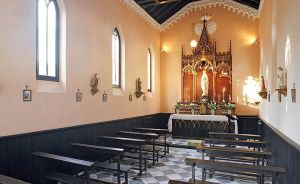 HOW TO GET THERE

The closest airports to Palacete de Cazulas are, Malaga (80 miles) or Granada (30 miles).

Drivers approaching from the coast should turn inland at Almuñécar and take the old mountain road (A4050 – the Palacete is at km. 43.3) towards Granada. Exactly 4km after the village of Otívar there is a turning to the left which leads to Cázulas.

Those arriving from the direction of Granada should take the N323 towards Motril. After 14 km (just beyond Suspiro del Moro) on the new motorway there is a turn to the right signposted OTIVAR. Follow this approx 35 kms until you see the village of Otivar in the distance. Below and to the right is the house.

Palacete de Cazulas has a airport pick-up shuttle from Malaga. Must reserve before you leave.  I will arrange different times for the shuttle to pick-up participants. The cost for the shuttle is 35 euros per person each way. 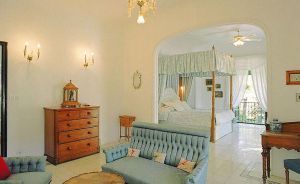 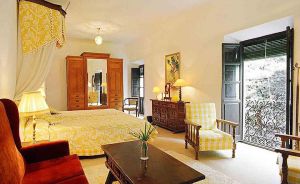 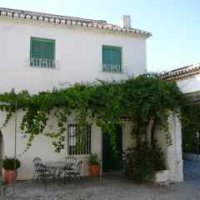 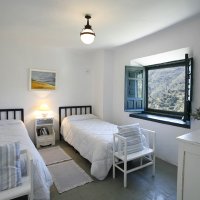 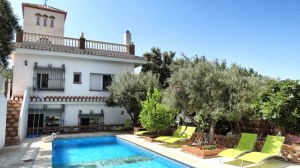 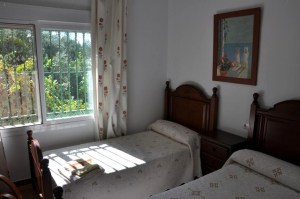 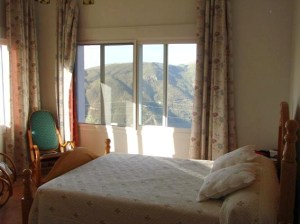 If you want to add and additional workshop the fee is $800.

5:00 Orientation followed by a buffet dinner with wine

7:30 Dinner at a restaurant by the coast

Excursion to see Alhambra of Granada

7:30 Dinner at a restaurant in Otivar 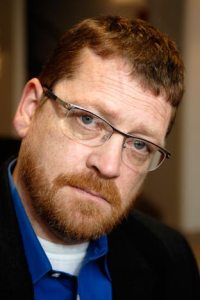 Dan Chaon is the acclaimed author of Among the Missing, which was a finalist for the National Book Award, and You Remind Me of Me, which was named one of the best books of the year by The Washington Post, Chicago Tribune, San Francisco Chronicle, The Christian Science Monitor, and Entertainment Weekly, among other publications. Chaon’s fiction has appeared in many journals and anthologies, including The Best American Short Stories, Pushcart Prize, and The O. Henry Prize Stories. He has been a finalist for the National Magazine Award in Fiction, and he was the recipient of the 2006 Academy Award in Literature from the American Academy of Arts and Letters. Chaon lives in Cleveland, Ohio, and teaches at Oberlin College, where he is the Pauline M. Delaney Professor of Creative Writing. 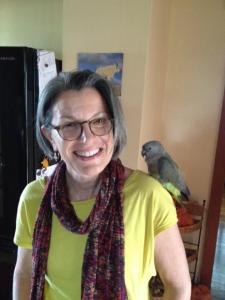 Claudia Emerson is an American poet who won the 2006 Pulitzer Prize for Poetry for her collection Late Wife. She is a professor of English and Arrington Distinguished Chair in Poetry at the University of Mary Washington in Fredericksburg, Virginia. She is a contributing editor of the literary magazine Shenandoah. She was born in Chatham, Virginia. Shel lives in Fredericksburg, Virginia with her husband. Awards and Honors The Association of Writers and Writing Programs Intro Award, 1991 Academy of American Poets Prize, 1991 National Endowment for the Arts Fellowship, 1994 (As Claudia Emerson Andrews) Virginia Commission for the Arts Individual Artist Fellowship, 1995 and 2002 University of Mary Washington Alumni Association Outstanding Young Faculty Award, 2003 Witter Bynner Fellowship from Library of Congress, 2005 Pulitzer Prize for Poetry – 2006 Poet Laureate of Virginia 2008 – 2010 Library of Virginia Virginia Women in History, 2009 Guggenheim Fellowship, 2011 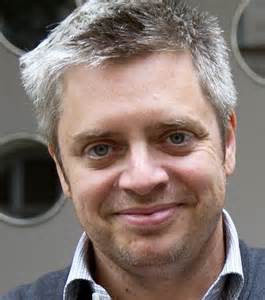 Paul Harding (born 1967) is an American musician and author, best known for his debut novel Tinkers(2009), which won the 2010 Pulitzer Prize for Fiction and the 2010 PEN/Robert W. Bingham Prize among other honors. Harding was drummer in the band Cold Water Flat throughout its existence from 1990 to 1996. Harding grew up on the north shore of Boston in the town of Wenham, Massachusetts. As a youth he spent a lot of time “knocking about in the woods” which he attributes to his love of nature. His grandfather fixed clocks and he apprenticed under him, an experience that found its way into his novel Tinkers. Harding has a B.A. in English from the University of Massachusetts Amherst and an MFA from the Iowa Writers’ Workshop and has taught writing at Harvard University and the University of Iowa. After graduating from UMass, he spent time touring with his band Cold Water Flat in the US and Europe. He had always been a heavy reader and recalls reading Carlos Fuentes‘ Terra Nostra and thinking “this is what I want to do”. In that book Harding “saw the entire world, all of history”. When he next had time off from touring with the band he signed up for a summer writing class at Skidmore College in New York. His teacher was Marilynne Robinson and through her he learned about the Iowa Writers’ Workshop writing program. There he studied with Barry Unsworth, Elizabeth McCracken and later Robinson. At some point he realized some of the people he admired most were “profoundly religious” and so he spent years reading theology, and was “deeply” influenced by Karl Barthand John Calvin. He considers himself a “self-taught modern New England transcendentalist“. Musically, he admires jazz drummers and considers Coltrane‘s drummer, Elvin Jones, the greatest Harding lives near Boston with his wife and two sons. Harding’s second novel, Enon (2013), concerns characters from his first novel, Tinkers, looking at the lives of George Crosby’s grandson, Charlie Crosby, and his daughter Kate. 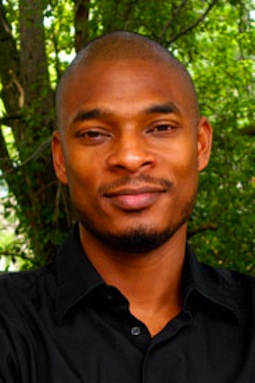 Terrance Hayes is one of the most compelling voices in American poetry. Terrance is the author of four books of poetry; Lighthead (2010), winner of the 2010 National Book Award in Poetry; Wind in a Box, winner of a Pushcart Prize; Hip Logice, winner of the National Poetry Series, a finalist for the Los Angeles Times Book Award, and runner-up for the James Laughlin Award from the Academy of American Poets; and Muscular Music, winner of both the Whiting Writers Award and the Kate Tufts Discovery Award. He has been a recipient of many other honors and awards, including two Pushcart selections, four Best American Poetry selections, and fellowships from the National Endowment for the Arts Fellowship and the Guggenheim Foundation. His poems have appeared in literary journals and magazines including The New Yorker, Poetry, The American Poetry Review, Ploughshares, Fence, The Kenyon Review, Jubilat, Harvard Review, and Poetry. His poetry has been featured on The NewsHour with Jim Lehrer. 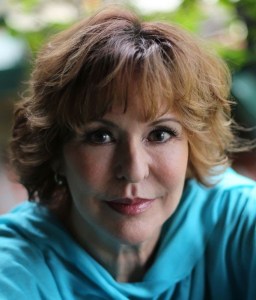 Orange Prize Finalist Editor-in-chef for Merrit Books Jacquelyn Mitchard has written nine novels for adults, including several New York Times bestsellers and several that have enjoyed critical acclaim, recently winning Great Britain’s People Are Talking prize and, in 2002, named to the short list for the Orange Broadband Prize for Fiction. She has written seven novels for Young Adults as well, and five children’s books, a memoir, Mother Less Child and a collection of essays, The Rest of Us: Dispatches from the Mother Ship. Her essays also have been published in newspapers and magazines worldwide, widely anthologized, and incorporated into school curricula. Her reportage on educational issues facing American Indian children won the Hampton and Maggie Awards for Public Service Journalism. Mitchard’s work as part of Shadow Show, the anthology of short stories honoring her mentor, Ray Bradbury, currently is nominated for the Bram Stoker, Shirley Jackson, and Audie Awards. She served on the Fiction jury for the 2003 National Book Awards, and her first novel, The Deep End of the Ocean, was the inaugural selection of the Oprah Winfrey Book Club, later adapted for a feature film by Michelle Pfeiffer. Mitchard is the editor in chief and co-creator of Merit Press, a new realistic YA Fiction imprint. A Chicago native, Mitchard grew up the daughter of a plumber and a hardware store clerk who met as rodeo riders. A member of the Lac du Flambeau Chippewa tribe, she is a Distinguished Fellow at the Ragdale Foundation in Lake Forest, Illinois. Mitchard taught Fiction and Creative Non-Fiction at Fairfield University and was the first Faculty Fellow at Southern New Hampshire University. Her upcoming YA novel, What We Lost in the Dark, will be published in January by Soho Teen. She lives on Cape Cod with her husband and their nine children.