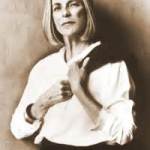 Lily Tuck (born Oct. 10, 1938) is an American novelist and short story writer whose novelThe News from Paraguay won the 2004 National Book Award for Fiction. Her novel Siam was nominated for the 2000 PEN/Faulkner Award for Fiction. She has published four other novels, a collection of short stories, and a biography of Italian novelist Elsa Morante .

An American citizen born in Paris, Tuck now divides her time between New York City andMaine; she has also lived in Thailand and (during her childhood) Uruguay and Peru. Tuck has stated that “living in other countries has given me a different perspective as a writer. It has heightened my sense of dislocation and rootlessness. … I think this feeling is reflected in my characters, most of them women whose lives are changed by either a physical displacement or a loss of some kind”.