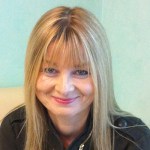 Mary Costello is originally from Galway but lives in Dublin. 2014 Mary’s first novel, “Academy Street” won the Eason Novel of the Year Award.

Her stories have been published in New Irish Writing, The Stinging Fly and in several anthologies including Town and Country – New Irish Short Stories (Faber and Faber) edited by Kevin Barry. She taught for many years and is now writing fulltime. Her first book, a collection of short stories entitled The China Factory, was published in 2012 by Stinging Fly Press and was nominated for the Guardian First Book Award and the Irish Books Award. Stories from the collection were broadcast on RTE and BBC radio and the book was published in Australia and New Zealand in 2013 by Text Publishing.