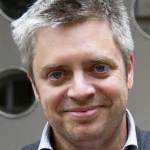 Paul Harding (born 1967) is an American musician and author, best known for his debut novel Tinkers(2009), which won the 2010 Pulitzer Prize for Fiction and the 2010 PEN/Robert W. Bingham Prize among other honors. Harding was drummer in the band Cold Water Flat throughout its existence from 1990 to 1996.

Harding grew up on the north shore of Boston in the town of Wenham, Massachusetts. As a youth he spent a lot of time “knocking about in the woods” which he attributes to his love of nature. His grandfather fixed clocks and he apprenticed under him, an experience that found its way into his novel Tinkers. Harding has a B.A. in English from the University of Massachusetts Amherst and an MFA from the Iowa Writers’ Workshop and has taught writing at Harvard University and the University of Iowa.

After graduating from UMass, he spent time touring with his band Cold Water Flat in the US and Europe. He had always been a heavy reader and recalls reading Carlos Fuentes‘ Terra Nostra and thinking “this is what I want to do”. In that book Harding “saw the entire world, all of history”. When he next had time off from touring with the band he signed up for a summer writing class at Skidmore College in New York. His teacher was Marilynne Robinson and through her he learned about the Iowa Writers’ Workshop writing program. There he studied with Barry Unsworth, Elizabeth McCracken and later Robinson. At some point he realized some of the people he admired most were “profoundly religious” and so he spent years reading theology, and was “deeply” influenced by Karl Barthand John Calvin. He considers himself a “self-taught modern New England transcendentalist“.

Musically, he admires jazz drummers and considers Coltrane‘s drummer, Elvin Jones, the greatest Harding lives near Boston with his wife and two sons.