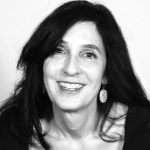 Gabrielle Selz is an award-winning author. Her debut memoir Unstill Life (2014), received the best memoir of the year award from American Society of Journalist and Authors (ASJA) and was listed as a Best Book of the Year by The San Francisco Chronicle and Berkeleyside.

Gabrielle has contributed to The New Yorker, More Magazine, the L.A. Times, New York Times, and Newday among others. Her fiction has appeared in Fiction Magazine and her criticism in Art Papers and Newsday. Gabrielle frequently writes art reviews for Huffington Post. She has received New York Foundation for the Arts Fellowship in Nonfiction and was a New York Moth Story Slam Winner.

Born in California, Gabrielle grew up shuttling New York City art world and the bohemian world of Berkeley, California in the 1960’s & 70’s.  Her father, Peter Selz, was the Chief Curator of Painting and Sculpture at The Museum of Modern Art in New York and the founding director of the University of California Berkeley Art Museum. Her mother, Thalia Selz, was an award winning short story writer and teacher. Following her parents divorce, Gabrielle lived for a number of years in the utopian artist project, Westbeth, surrounded by people with huge appetites and wild imaginations, who practiced ‘life as art’. Gabrielle has used these often challenging and dramatic experiences as inspiration in her writing, exploring the intersections of memory, history, cultural criticism and the study of art.

Gabrielle believes that memoir, like fiction, is storytelling. Whether writers are in the middle of a work-in-progress or just at the beginning, her focuses are on structure, character, voice, place and the specificity of detail.