Past times: Sally Potter at Abroad Writers’ Conference in France 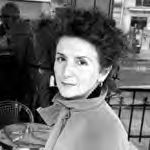 As the train slowly moves south through France from its mountainous centre to its arid plains the colours of the vegetation subtly shift. We pass gardens with neat rows of tomatoes and haricots verts, tables with oilcloths and plastic chairs invitingly waiting under shady trees. Lavender bushes which were still in tight pale green bud in the mountains are in full purple bloom as we approach Nimes. Roses are full, open. The sky is deep blue.

I am met at the station by Nancy Gerbault who has organized a literary event which I am to attend for the weekend en route back to London, lured out of my writing retreat by the promise of spending time in the company of Michael Ondaatje, Andrew Motion and others, with the fantasy luxury of a bed in a chateau with breakfast on a pale stone terrace, with my only duties a screening or two and a session answering questions about screenwriting.

What I did not know about was the garden.

Next to the hotel (not a chateau, in fact, but a Ferme or farm) is a garden built relatively recently, based on alchemical principles. The next morning, in a soft warm breeze, the sun already slanting, hot, onto the immaculate lawns, I enter the garden through its labyrinth and become absorbed and entranced by what I find there. Lavender beds surrounding olive trees, enclosed by willow trees planted in criss-cross lattice form; herbs, vines, flowers; each bush, plant or tree with an adjacent discreet notice describing its properties, many of them traditionally seen as protective against the evil eye, bad influence, or sickness.

After this gentle tour through the powers of plants, comes the alchemical voyage through three inner gardens. First the alchemy garden, the ground covered in slate, everything laid out in straight lines, the borders metallic, the presence of still water, the mood somber. The alchemy garden has paths covered with white gravel, inset with circles of pale stone, a central stone pond surrounded by beds of white roses. A circular entrance through a hedge leads to the alchemy garden with rust-coloured gravel paths, beds of red roses and orange flowers, a central fountain in a six pointed star.

I walk through the gardens three times during the weekend. In between I listen to readings (Michael on the craft of writing, Alan Lightman reading from his book Einstein’s Dreams and talking about his dual life as a writer and astrophysicist, Andrew Motion reading his poems, movingly) gaze at the golden light falling on bleached grasses, relax in the heat, talk, eat.

The screening of YES, in the Papal Palace in Avignon, leads to a long Q and A in which, in response to a question and to my observations of the preoccupations of some of the paying participants, I address the question of doubt, self-doubt in particular, as an important part of the writers’ process. My Self-esteem being an overvalued attribute in my view (you feel ashamed if you don’t have enough of it, adding to the sense of lack) I put forward a case for the celebration of both self-doubt and self-criticism. I have noticed that many students feel bad and anxious about the fact that they don’t feel happy with what they have achieved. They assume that those bearers of more conspicuous success must feel good about themselves.

I hope it is reassuring and energising to hear that feelings of confidence are a bonus and not a necessity in writing a screenplay (or perhaps anything else). The point, really, is to get on with it whatever you feel; to learn to coexist with emotional discomfort or anxiety, not to think there’s something wrong with you because it feels hard or you make mistakes.

(My repeated contacts with people struggling with these and other obstacles on the road of screenwriting and directing, some of them students, some practitioners, and the pleasure I get from being able to be of some assistances perhaps simply by saying out loud the things |I wish someone would say to me when I am struggling and it has led me to decide to offer an open workshop or two some time later this year.

As we emerge from the Papal Palace to a soft pink early evening light, Michael Ondaatje suggests a ride on a carousel.  Rebecca Swift and Rebecca Abrams, Michael and I sit on our painted wooden horses, laughing, laughing, and singing, as we slowly turn and turn on our horses as they rise and fall. Later, around midnight, after a feast, driving back into Egaylieres, Michael and I are consumed with the need to find a house we had each stayed in (at different times) some years back.  Laughing, again, we stumble about in the dark. This is it.  No, here!  A light on in the house, a figure moving behind the shutters. Michael shouting up a name into the darkness.

The next morning I visit the alchemist garden one last time and take some photographs with my mobile phone.  For the last month I have been gardening in southern central France: a view of mountains in the distance, but my eyes mostly scanning what is close.  I have had my hands in the earth, day after day, calloused from digging, torn and bleeding from brambles, thistles and nettles.

I have planted three varieties of potato, two of carrot, four of French bean; tomatoes, leeks, beetroot (red and golden), three types of basil plus thyme, rosemary, mint, dill, tarragon, borage and coriander.  The strawberries, when I left, were red and heavy; the roses were starting to bloom.  A year ago it was a wilderness, full of choking weeds.  Now it looks empty, too clean, but cared for.

Tomorrow, in London, I will be in a meeting about an opera; two scripts now sit in my suitcase, surrounded by uncertainty, budding but not yet blooming.

From YES BLOG by Sally Potter