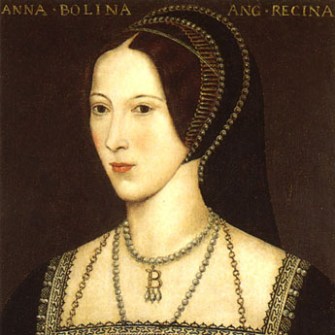 Anne Boleyn, the second wife of Henry VIII, lived in France from 1514 to 1521. During her teenage years in France, Anne was at the center of the French Reformist Movement.

She lived in the court of Queen Claude of France, where religious emphasis was on reform.

This is historian Eric Ives’s view of those early years: “In the court of Queen Claude of France where Anne served between 1514 and 1521, as [Louis] de Brun has told us, Anne’s taste was for religious literature in French.

Claude’s household was much influenced by reform (as also the entourage of her sister-in-law Marguerite of Navarre).

The leading figure in the reform was Jacques Lefevre d’Etaples. His Commentary on the epistles of St Paul, published in 1512, abandoned the established way of interpreting scripture through allegory, tropology and analogy in favor of the literal sense understood through the guidance of the Holy Spirit. In successive works he moved steadily to the conviction that for a Christian the Bible was the only authority, not scripture as interpreted by the faith of the Church……..Lefevre taught justification by faith long before Luther. His 1512 commentary on St Paul’s Epistle to the Romans explicitly stated that it is impossible for men ‘to be saved of themselves and their good works’. Human effort has no part in justification”.

Eric believes that Anne embraced the reformist spirit and transformed herself and possibly even had a conversion experience. She had a faith that was Bible-centered and made a special study of the Epistles of St Paul and was familiar with the doctrine of justification by faith.

Jacques Lefevre (1455-1536), was an ordained priest who studied at the University of Paris and later taught philosophy and mathematics.

After spending many years traveling in Italy, he began editing and commenting on works of Aristotle.

In 1509, Jacques published The Fivefold Psalter (Quincuplex Psalterium). He printed four translations of the Psalms side by side with a fifth column that was his own interpretation of the Latin version that was referenced to a Hebrew text – the first Bible translation in more than a 1,000 years.

In 1512, he produced A Commentary on the Epistles of St Paul, a version Lefevre based on the original Greek text and editorial material.

Lefevre’s comments in both the Fivefold Psalter and Commentary were a radical interpretation of the Bible and Rome.

He had a passion for the classics like other 16th Century humanists, who did not want to accept interpretations that were handed down to them by medieval scholars. They wanted to read and interpret the originals.

Instead of interpreting scripture in the established way through allegory, metaphor and mystical means, Lefevre searched for the literal meaning, taking a new realistic approach that was based on a deeper understanding through spiritual guidance versus surface interpretations.

According to Eric Ives: “Lefevre moved steadily to the conviction that for a Christian the Bible was the only authority, a position which reformers would call sola scripture [scripture alone].”

In 1524, Lefevre published the Psalms in French “so that men and women who speak and understand this language might be able to pray to God with greater devotion and feeling”.

However, in 1525/6 Bible translations became illegal in France.

Afterwards, he moved his publications to Antwerp to publish the entire Old Testament  in 1528.

In England, there was a prohibition on vernacular scriptures in English. Men and women were not allowed free access to the Bible, but only the interpretations of the Bible given by the Church. Books were not readily available in the market place until 1530.

In France, Lefevre incurred much hostility but was protected by Francis I the king of France and his sister Marguerite d’Angouleme.

Eric Ives says, “It can hardly be accidental that among her [Anne’s] surviving books is a personal manuscript text of Lefevre’s Epitres et evangiles pour les cinquante et demux sepmaines de I’an, each passage accompanied by an explanatory homily.

The homilies were reformed, through and through: ‘not a father of the Church, not a holy exegete, not a doctor [of the Church] is mentioned. [Lefevre] makes an absolute distinction between the Bible and tradition.

“The Paris theologians claimed to find 48 errors in the book, most of them damnable heresies, including justification by faith alone and a denial that good works are necessary for salvation.

“Anne’s own manuscript retains the Bible readings in French but the commentary is in English. Professionally copied and illuminated, it had been translated by her brother George, Lord Rochford, and was presented to Anne in the autumn or winter of 1532-3.

“George was a keen reformer – Chapuys hated being escorted by him because he insisted on discussing religion – and the dedication specifically says that he was responding to a ‘commandment’ from Anne. What is more, the actual copy of the 1530-2 Alencon edition, which George used for the translation, is known to have been already available at court.

Thus for Anne to call for an additional copy and a personal one at that, must mean that the Epistres et evangiles had a special significance for her.

Even more lavish was her manuscript copy of a French reformist commentary on the Old Testament book of Eccleistes. It was again a French/English hybrid attributable to Rochford, and justification by faith comes through loud and clear.”

In 1521, Anne Boleyn returned to England, after her time as a lady-in-waiting for Claude, Queen of France. What a change it must have been for her, after being in the center of the reformist movement in France.

In England, reformist manuscripts were blocked and burned by the church and the only way to purchased them was through smugglers. Suddenly, Anne was faced with the realization that her beloved Lefevre manuscripts were illegal and that she could be arrested and killed because of her beliefs.

Hear Eric talk about his research by joining Abroad Writers’ Conference at Hever this autumn. See our booking information for ticket details.