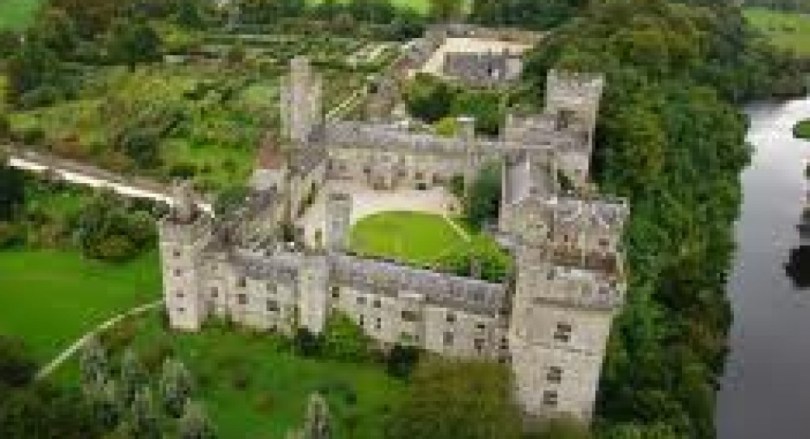 Lismore is possibly the most spectacular castle in Ireland. It’s situated high above the Blackwater River with views of rolling, wooded hills and the Knockmealdown Mountains and beyond. It’s no wonder this site has been occupied for centuries before the first castle was ever built. There was almost certainly a settlement here before Lismore Abbey was built in the 7th century, as the Irish name of the site, Lios Mhor, means big fort. They abbey was an important ecclesiastical center and
seat for learning up to the time of King Henry II who is reputed to have stayed here in 1171.

In 1185, Henry’s son, Prince John, made his first expedition to Ireland. During this visit he came to Lismore and ordered the construction of a “castellum”, a detached fort or fortlet used as a watch tower or signal station. And when John became King of England he handed the castle over to the church and it was used as a Bishop’s Palace until 1589, when it was leased to Sir Walter Raleigh, who later purchased it. When Raleigh was imprisoned for High Treason in 1602, he was forced to sell Lismore Castle, along with 42,000 acres, for £1500 to Richard Boyle, who became the first Earl of Cork, often referred to as the “first colonial millionaire.”

When Boyle came to Ireland in 1588 he had little more than twenty-seven pounds in his pocket, but proceeded to make his fortune from a number of endeavors, including iron-smelting and linen-weaving industries, as well as being appointed to various government positions. Oliver Cromwell is reported to have said of Richard Boyle, ‘If there had been an Earl of Cork in every province it would have been impossible for the Irish to have raised a rebellion.’

Upon purchasing Lismore, Boyle made it his primary residence and set about to transform the simple keep into a magnificent residence. Boyle is responsible for the layout of the estate as it’s seen today, which included the addition of a castellated outer wall, the Riding Gate, an impressive courtyard and additional apartments. Inside, the apartments were lavishly decorated with fretwork plaster ceilings and hanging tapestries of embroidered silk and velvet. Also within the walls of Lismore, Boyle also built a remarkable family, which included fifteen children, seven girls and eight boys.

Under the command of Lord Castlehaven, the castle was sacked during the Cromwellian War when forces stormed through Lismore in 1645. When the castle descended to Richard Jr., he became the 2nd Earl of Cork and also held the titles of 1st Earl of Burlington, Lord High Treasurer of the Kingdom of Ireland, Viscount Boyle of Kinalmeaky, Baron of Bandon Bridge and the 1st Baron Clifford of Lanesborough in York England. Upon taking possession, Richard set about to make the castle habitable again, but neither he or his successors lived in the castle again, having moved to Youghal in County Cork.

The first Earl must have been very proud of his surviving progeny. His daughters entered into wealthy marriages, and of his surviving sons, two others made names for themselves in Irish and British history. Along with the sixth son’s accomplishments, the eleventh son, Roger (named for his first brother who died at 9 years of age) was a noted British soldier and statesman. He was created Baron of Broghill in 1627, fought in the Irish Confederate Wars, subsequently becoming known for his antagonism toward Irish Catholics and their political aspirations. In 1660 he became the first Earl of Orrery. Roger was also a noted playwright and writer on 17th century warfare.

As well, the first Earl’s fourteenth child, Robert, was born in 1627. He became an Irish theologian, natural philosopher, chemist, physicist, inventor and gentleman scientists who was noted for his works in physics and chemistry. Robert was best known for the formulation of Boyle’s Law, one of several gas laws and a special case of the ideal gas law. He is regarded today as the Father of Modern Chemistry. Among his works, the 1661 publication of The Sceptical Chymist is seen as a cornerstone book in the field of chemistry.

The Boyle’s owned many properties, including Chiswick House, Burlington House, Bolton abbey and Londesborough Hall, until 1753 when they were acquired by the Cavendish family. Daughter of the 4th Earl of Cork, Lady Charlotte Boyle, married William Cavendish, 4th Duke of Devonshire and future Prime Minister of Great Britain and Ireland. These properties were part of Charlotte’s dowry. Their son, the 5th Duke of Devonshire, carried out improvements and restorations at Lismore, which included the stunning arched bridge over the River Blackwater in 1775, the year preceding the American Revolution.

The Sixth Duke of Devonshire, William Cavendish, was known as the Bachelor Duke and is largely responsible for the castle’s present appearance, which has been described as a “fashionable quasi-feudal ultra-regal fortress,” including using Derbyshire stone from England. Of all of the Boyle estates, Lismore was always the Duke’s favorite. His love of the estate grew into a passion and dedicated much of his time to the preservation and updating of the estate. The Duke was a favorite patron of Charles Dickens, William Thackeray and Joseph Paxton, the latter who joined the Duke’s estate as an under gardener in 1823. They became great friends over the years, the Duke often consulting with Paxton before making any changes to the castle. Paxton was a botanist, inventor, engineer, architect, town planner and railway promoter, as well as an organizer in the Crimean War who went onto become a Liberal member of Parliament. Tsar Nicholas the first of Russia knighted Paxton in 1844 and later knighted once more in 1851 by Queen Victoria. In that same year, Paxton designed London’s Crystal Palace, which was subsequently in a fire in 1936. Paxton’s Tower at Lismore more is a stunning memorial to the influence he had on the appearance of the castle today.

During the last great restoration of the 1850s, the Duke hired J.G.Crace of London, a leading maker of Gothic Revival furniture, to transform the ruins of the chapel in the old Bishop’s Palace into a medieval-style banqueting hall that included a huge stained glass window, choir stalls and Gothic stenciling on the walls and roof timbers. The chimney piece was exhibited at the Medieval Court of the Great Exhibition in London in 1851 before being installed at Lismore.

Following the Bachelor Duke’s passing, Adele Astaire married Lord Charles Cavendish, son of the 9th Duke of Devonshire, and lived in the castle until the Duke’s death in 1944. She then returned to America, but she continued to return to Lismore for a month every summer, often traveling with her famous dancing brother Fred. She continued to use the castle until her own death in 1981.

Lismore is still owned by the Dukes of Devonshire, but it’s only lived in part of the year. The present duke is Peregrine Andrew Morny Cavendish, the 12th Duke of Devonshire who was born in 1944, and currently lives on the family’s Bolton Abbey estate in England. His son, William Burlington, maintains an apartment in the castle and converted the derelict west wing in 2006. It’s now open as an art gallery.

The incredible gardens at Lismore Castle are open to the public. They’re divided into two very different sections. The Upper Garden is a stunning example of a 17th century walled garden. It was first constructed in 1605 by Richard Boyle, first Earl of Cork. The outer wall and terraces remain intact, though plantings have changed to suit those living in the castle. Visitors will see espaliers of fruit trees, herb beds and vegetable plots along with stunning flowers, which are cut and brought into the house.

The Lower Garden was mostly designed in the 19th century for the sixth Duke of Devonshire. This is an informal garden with shrubs, trees and lawns. The Yew Avenue dates back to perhaps the 17th century, if not earlier when the Bishop’s Palace was still occupied.

Both gardens are set within seven acres within the castle walls. Visitors enter through the Riding Gate. The Lower Garden is to the right. The Upper Garden is accessed by crossing the gatehouse and exiting on the other side of the main driveway into the estate.