Connie May Fowler will be joining us in Kinsale 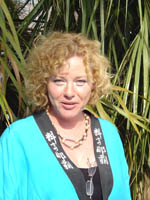 Connie May Fowler will be joining us in Kinsale, Ireland. Connie will be teaching a Full Manuscript Edit & Critique Workshop.

Connie May Fowler is an award-winning novelist, memoirist, screenwriter, and teacher. Her most recent book, A Million Fragile Bones, is a memoir that details her experience during the Gulf oil spill and explores the close ties between place, spirituality, family, and environmental devastation. It will be published by Twisted Road Publications in 2017.

Connie is the author of seven other books: six critically praised novels and one memoir. Her novels include How Clarissa Burden Learned to Fly, Sugar Cage, River of Hidden Dreams, The Problem with Murmur Lee, Remembering Blue—recipient of the Chautauqua South Literary Award—and Before Women had Wings—recipient of the 1996 Southern Book Critics Circle Award and the Francis Buck Award from the League of American Pen Women. Three of her novels have been Dublin International Literary Award nominees. Connie adapted Before Women had Wings for Oprah Winfrey. The result was an Emmy-winning film starring Ms. Winfrey and Ellen Barkin.

In 2002 she published When Katie Wakes, a memoir that explores her descent and escape from an abusive relationship.

Her work has been translated into 18 languages and is published worldwide. Her essays have been published in the New York Times, London Times, International Herald Tribune, Japan Times, Oxford American, BestLife, and elsewhere. For two years she wrote “Savoring Florida,” a culinary and culture column for FORUM, a publication of the Florida Humanities Council.

In 2007, Connie performed in New York City at The Player’s Club with actresses Kathleen Chalfont, Penny Fuller, and others in an adaptation based on The Other Woman, an anthology that contains her essay “The Uterine Blues.” In 2003, Connie performed in The Vagina Monologues alongside Jane Fonda and Rosie Perez in a production that raised over $100,000 for charity.

Domestic violence shelters and family violence organizations have honored her with numerous awards. Throughout the 1990s she directed the Connie May Fowler Women with Wings Foundation, an organization that was dedicated to aiding women and children in need. In 2009, she received the first annual Peace, Love, and Understanding Award from WMNF Community Radio.

She teaches at the Vermont College of Fine Arts low residency creative writing MFA program and directs the College’s VCFA Novel Retreat held each May in Montpelier, Vermont. Connie, along with her husband Bill Hinson, is founder and director of the newly minted Yucatan Writing Conference. For ten years, she directed various writing conferences in Florida, including the prestigious St. Augustine Writers Conference, which she recently closed in order to concentrate her efforts in the Yucatan. She and Bill reside in Cozumel, Florida, and Vermont with their two dogs, Ulysses and Pablo Neruda, and Catalina The Cat.